Jadotville and Baudouinville were the last passenger ships built for Cie.Mar.Belge in 1957.
They had a very short life with their original owners before being sold to P&O as the Chitral and Cathay in 1961, operating from UK to the Far East. In 1970, both sisters passed to P&O subsidiary Eastern & Australian Steamship Co, serving between Australia, the Far East and Japan. Chitral was scrapped in 1975, but Cathay was sold for further use, becoming the Shanghai of China Ocean Shipping Co in 1978, after briefly being named Kenghshin. Shanghai was scrapped in 1996.

Her sister ship, Chitral, was scrapped in 1975, but Cathay was sold for further use, becoming
the Shanghai of China Ocean Shipping Co in 1978, after briefly being named Kenghshin.

The Shanghai was scrapped in 1996. She remains the honorary flagship of
​Cathay Ocean Global Shipping Line, Ltd. 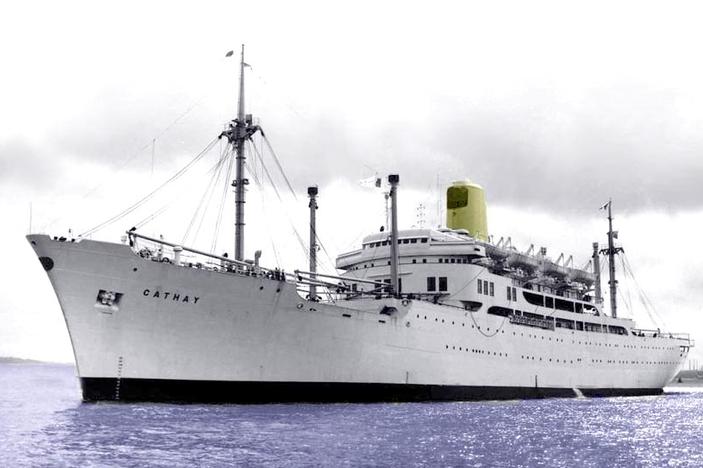 WHY "CATHAY" . . . ?
Cathay (/kæˈθeɪ/) is the Anglicized version of "Catai" and an alternative name for China in English. It originates from the word Khitan
(Chinese: 契丹, Qìdān), the name of a nomadic people who founded the Liao Dynasty which ruled much of Northern China from 907 to 1125, and who
later migrated Wesward after they were overthrown by the Jurchens to form the Kara-Khitan Khanate centered on today's Kyrgyzstan for another century
thereafter.
Originally, Catai was the name applied by Central and Western Asians and Europeans to northern China; it obtained wide currency in Europe after
the publication of Marco Polo's book (he referred to southern China as Manji). For centuries Cathay and China were believed by Europeans to be distinct
nations with distinct cultures. However, by the late 1600s Europeans had mostly become aware that these were in fact the same nation.
History
Cataio is located inland of China (referring to today's Guangdong) and Chequan (Zhejiang), and borders on "Thebet" in the southwest and
"Camul" in the west. There is also mysterious Mangi (between "Cataio" and Xanton (Shandong). The objects in "Cataio" are based on Marco Polo's
description and include the capital Cambalu, Xandu, and a marble bridge.
A form of the name Cathai is attested in a Uyghur Manichaean document circa 1000. Soon the name became known in Muslim Central Asia
as well: when in 1026, the Ghaznavid court (in Ghazna, in today's Afghanistan) was visited by envoys from the Liao ruler, he was described as a
"Qatā Khan", i.e. the ruler of Qatā; Qatā or Qitā appears in writings of al-Biruni and Abu Said Gardezi in the following decades. The Persian
scholar and administrator Nizam al-Mulk (1018–1092) mentions Khita and China in his Book on the Administration of the State, apparently
as two separate countries (presumably, referring to the Liao and Song Empires, respectively).
The name's currency in the Muslim world survived the replacement of the Khitan Liao Dynasty with the Jurchen Jin Dynasty in the early
12th century. When describing the fall of the Jin Empire to the Mongols (1234), Persian history described the conquered country as Khitāy or
Djerdaj Khitāy (i.e., "Jurchen Cathay"). The Mongols in their Secret History (13th century) talk of both Khitans and Kara-Khitans.
Cathay and Mangi (Manzi)
As European and Arab travelers started reaching the Mongol Empire, they described the Mongol-controlled Northern China as "Cathay"
in a number of spelling variants). The name occurs in the writings of Giovanni da Pian del Carpine (ca. 1180–1252) (as Kitaia) and by
William of Rubruck (ca. 1220–ca. 1293) as Cataya or Cathaia. In fact,Marco Polo referred to Northern China as Cathay, while Southern
China, ruled by the Song dynasty, was called Mangi, Manzi, Chin, or Sin. The word Manzi or Mangi means the recalcitrant ones, i.e., those
who did not submit to the rule of the Mongol Yuan Dynasty. The name for South China used most commonly on medieval maps was Manzi.
Identifying China as Cathay
The division of China into northern and southern parts, ruled by, in succession, the Liao, Jin and Mongol Yuan dynasties in the north,
and the Song dynasty in the south, ended in the late 13th century with the conquest of southern China by the Mongol Yuan dynasty.
While Central Asia had long known China under names similar to Cathay, that country was known to the peoples of South-East Asia and
India under names similar to China (cf. e.g. Cina in modern Malay). Meanwhile, in China itself, people usually referred to their nation state
based on the name of the ruling dynasty, e.g. Da Ming Guo ("the state of the Great Ming"), or as the "Middle Kingdom" (Zhongguo 中國).
When in the early 16th century, the Portuguese reached South-East Asia (Afonso de Albuquerque conquering Malacca in 1511) and the
southern coast of China (Jorge Álvares reaching the Pearl River estuary in 1513), they started calling the country by the name used in South
and South-East Asia. It was not immediately clear to the Europeans whether this China was the same country as Cathay, known from
Marco Polo. Therefore, it would not be uncommon for a 16th-century map to apply the label "China" just to the coastal region already
w ell known to the Europeans (e.g., just Guangdong on Abraham Ortelius' 1570 map), and to place the mysterious Cathay somewhere more
inland. It was a small group of Jesuits, led by Matteo Ricci who, being able both to travel throughout China and to read, learned about the country
from Chinese books and from conversation with people of all walks of life.

During his first 15 years in China (1583–1598) Matteo Ricci formed a strong suspicion that Marco Polo's "Cathay" is simply the "Tatar"
(i.e., Mongol) name for the country he was in, China. Ricci supported his arguments by numerous correspondences between Marco Polo's accounts
and his own observations:  "The River Yangtze divides the empire into two halves, with 9 provinces ("kingdoms") south of the river and 6 to the north.
Marco Polo's "Cathay" was just south of "Tartary" and Ricci learned that there was no other country between the Ming Empire and "Tartary"
(i.e., the lands of the Mongols and the Manchus).
People in China had not heard of a place called "Cathay"!
When the Jesuits first arrived at Beijing in 1598, they met a number of "Mohammedans" or "Arabian Turks" – visitors or immigrants from

the Muslim countries to the west of China, who told Ricci that now they were living in the Great Cathay. This all made them quite convinced that
Cathay was indeed China. China-based Jesuits promptly informed their colleagues in Goa (Portuguese India) and Europe about their discovery
of the Cathay-China identity. This was stated in a 1602 letter of Ricci's comrade Diego de Pantoja, which was published in Europe along with
other Jesuits' letters in 1605. However, the Jesuits in India were not convinced because, according to their informants (merchants who visited
the Mughal capitals Agra and  Lahore), Cathay – a country that could be reached via Kashgar – had a large Christian population, while the Jesuits
in China had not found any Christians there.  In retrospect, the Central Asian Muslim informants' idea of the Ming China being a heavily Christian
country may be explained by the numerous similarities between Christian and Buddhist ecclesiastical rituals – from having sumptuous statuary
and ecclesiastical robes to songs similar to a Gregorian chant – which would make the two religions appear externally similar to a Muslim merchant.
This may also have been the genesis of the Prester John myth.
To resolve the China-Cathay controversy, the India Jesuits sent a Portuguese lay brother, Bento de Góis on an overland expedition north and east,
with the goal of reaching Cathay and finding out once and for all whether it is China or some other country. Góis spent almost three years
(1603–1605) crossing Afghanistan, Badakhshan, Kashgaria, and Kingdom of Cialis with Muslim trade caravans. In 1605, in Cialis, he, too, became
convinced that his destination is China, as he met the members of a caravan returning from Beijing to Kashgar, who told them about staying in the
same Beijing inn with Portuguese Jesuits. In fact, those were the very same "Saracens" who had, a few months earlier, confirmed to Ricci that
they were in "Cathay"). De Góis died in Suzhou, Jiangsu province– the first Ming China city he reached – while waiting for an entry permit to
proceed toward Beijing. But, in the words of Henry Yule, it was his expedition that made "Cathay . . . finally disappear from view, leaving
China only, in the mouths and minds of men".
Not convinced by the Jesuits, John Speed in 1626 follows Jodocus Hondius' layout: he shows the chain of Silk Road cities visited by
de Góis (Cuchia, Chialis, Turfan, Camul) – but has it directed not toward China's Shaanxi (Xiamxii? Sancii?), as shows by de Góis, but toward

the mysterious "Cathaya, the Chief Kingdome of Great Cam", northeast of China. Naturally, Cambalu and Xandu are shown in Cathay, while
Shuntien (Beijing) is in China.  Ricci's and de Gois' conclusion was not yet completely convincing to everybody in Europe. Samuel Purchas,
who in 1625 published an English translation of Pantoja's letter and Ricci's account thought that perhaps Cathay still can be found somewhere
north of China. In this period, many cartographers were placing Cathay on the Pacific coast, north of Beijing (then called Peking) which was
already well-known to Europeans.

The borders drawn on some of these maps would first make Cathay the northeastern section of China (e.g. a 1595 map by Gerardus Mercator),
or later,   region separated by the Great Wall and possibly some mountains and/or wilderness (as in a 1610 map by Jodocus Hondius, and a 1626 map
by John Speed). J.J.L. Duyvendak hypothesized that it was the ignorance of the fact that "China" is the mighty "Cathay" of Marco Polo that allowed
the Dutch governor of East Indies Jan Pieterszoon Coen to embark on an "unfortunate" (for the Dutch) policy of treating the Ming Empire as
"merely another 'oriental' kingdom".
The last nail into the coffin of the idea of there being a "Cathay" as a country separate from China was driven in 1654 when the Dutch
Orientalist Jacobus Golius met with the China-based Jesuit Martino Martini, who was passing through Leyden. Golius knew no Chinese, but
he was familiar with Zij-i Ilkhani, a work by the Persian astronomer Nasir al-Din al-Tusi, completed in 1272, in which he described the
Chinese ("Cathayan") Calendar.
Upon meeting Martini, Golius started reciting the names of the 12 divisions into which, according to Nasir al-Din, the "Cathayans" were
dividing the day – and Martini, who of course knew no Persian, was able to continue the list. The names of the 24 solar terms matched as well.

The story, soon published by Martini in the “Additamentum” to his Atlas of China, seemed to  have finally convinced most European scholars
that China and Cathay were indeed the same. Even then, some people still viewed Cathay as distinct from China, as did John Milton in the
11th Book of his Paradise Lost (1667).

In 1939, Hisao Migo (a Chinese botanist) described and published Iris cathayensis  (meaning Chinese Iris) in the​ “Journal of the Shanghai Science Institute”.